"I placed an order with you last week and I have to tell you the service was great! I had a glitch in the credit card processing and both ladies I worked with were very kind and expedient. Please thank them for me. I will be doing more business in the future. Keep up the good work. It is nice to feel like a wanted customer."
J.C. from Texas 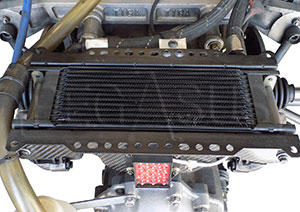 For the purposes of this article, we will focus on plate-type oil-to-air coolers, such as the Setrab Pro Line. Finned-tube coolers and oil-to-water heat exchangers operate just a little differently. Since we don't offer either of those types, we're going to take the liberty of ignoring them.

Also, in order to avoid apples-to-oranges comparisons, please remember that all assertions imply "all other variables being equal." AGREED, you can change another part of the equation to get the answer you want. Like a track test or dyno run, changing just one factor at a time makes the effect of that change much clearer.

Start with the Chart

Setrab USA has gone to the trouble of providing us with a very handy oil cooler application chart (PDF format) that gives us a starting point without having to do math. The chart covers engine oil coolers, transmission coolers, and even power steering and valve spring coolers. Note that the chart is arranged by part number, not by application. Browse the chart a bit and you'll see that most applications are listed under more than one cooler size.

Here are some broad, oversimplified, very general principles to keep in mind when choosing a cooler. Remember that all of these imply "all other variables being equal."

In the list above, the only apparent conflict we have to wrestle with is in plate length. Longer plates cool better (good), but at the expense of flow (bad). Fortunately, the last point in the list above suggests a good workaround: We can choose a shorter cooler to regain some of the lost flow, and simply add more rows to regain some of the lost cooling. Even better, adding more rows simultaneously improves flow even further.

Let's take an example from the Setrab application chart and do just a little math. Say we have a high-performance engine putting out about 325 HP. The chart suggests at least three possibilities: Series 9 with 20 rows, Series 6 with 25 rows, or Series 1 with 50 rows. All three of these coolers have an effective cooling area right around 75 square inches, so their cooling performance is similar.

Using real numbers, with a 10 GPM flow rate as an example (not uncommon for an engine running 6000 - 8000 RPM), the 20-row Series 9 will introduce a 5 psi pressure drop from inlet to outlet. (Note that a single 90 degree fitting in your oil line could cause more restriction than that.) The 25-row Series 6 will cause a 2.6 psi drop. The Series 1 will show less than a 1 psi pressure drop. The flow restriction from the Series 1 option may not even register on your oil pressure gauge.

There are just two general rules when it comes to mounting the cooler. (Remember, "all other variables being equal.")

The airflow equation is a little complicated. As airflow velocity increases, the additional benefit decreases (the graph begins to flatten around 40 mph). The important takeaway is that your oil cooler needs to be exposed to airflow. The largest oil cooler will be ineffective if it's sealed in the trunk or mounted flat up against the firewall. Air must be able to get into the cooler, and it must be able to get out of the cooler. This is what carries away the heat.

In many cars, this suggests mounting the cooler near the radiator. After all, Detroit / Stuttgart / Tokyo spent a lot of time and effort to locate the water radiator where it would get the best airflow. It seems like a no-brainer to follow their lead. But that leads to the second point above.

The air temperature difference also means that if we run two oil coolers, they should be plumbed in parallel, rather than in series. If you run two coolers in series, the oil in the second cooler would be cooler (closer to the air temperature) than the oil in the first cooler, making it much less efficient. Another bonus to plumbing in parallel is that it has the same effect as adding more rows to the cooler: Less flow restriction for an even happier oil system.

Much more information about mounting oil coolers for maximum air flow with minimum drag can be found in Chapter Nine of Tune To Win by Carroll Smith.