"I just received my order today and I wanted to say THANK YOU for the care you took in packing it. The outer box looks like it took a fair beating on the way here, but I am happy to report that everything inside was packed so well that it all arrived in perfect condition. You made my day!"
J.H. from Texas 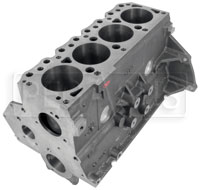 So how can you tell one engine from another? How do you identify what you have if you have nothing to compare it to? For the purposes of this article, we're going to focus on just the two engines that we specialize in: the 1.6L OHV (pushrod) "Kent" engine and the 2.0L SOHC "Pinto" engine. This information comes from many sources, including Dave Bean, Ford Racing, Des Hammill, Peter & Valerie Wallage, Wikipedia, and the experience of hundreds of racers and engine builders (far too many to list individually).

1600cc is a very popular displacement for 4-cylinder engines, and Ford has built at least 5 totally unrelated inline-4 gasoline engines of 1600cc capacity. Taking them chronologically, the Kent is the oldest (1967-82). This is the only 1600cc Ford engine that has pushrod-actuated valves.* The next in line is actually a de-stroked "Pinto" OHC engine (confusing because in 1971-73 the 1600cc engine in the Pinto was the Kent 1600cc engine). The third is the CVH, known as "Escort" in the US (confusing because the US-market Escort that used this engine was unrelated to the older European Escort, which was available with a Kent or a Pinto engine… see why we tear our hair out?) The fourth is a Mazda-designed DOHC engine used on the 1991-94 Mercury Capri (confusing because the unrelated 1970s Ford Capri was available with either a Kent or a Pinto engine). Next is the DOHC Zeta/Zetec from 1992 (confusing partly because production overlapped the Mazda/Mercury Capri DOHC). The Zetec morphed into the Duratec in the 1990s (confusing because the Duratec name has also been carried by a Zetec engine… even by a Kent engine!). Finally, there is the EcoBoost 1.6, the only 1600cc gasoline engine that came directly from Ford with a turbocharger. Be happy we're not counting diesel engines!

The Kent engine is named, per Ford tradition, for the engine plant where it was produced: The Ford engine plant in the county of Kent in England. Engines in the Kent family have a chain-driven camshaft that rides in the block, and a rocker-arm valvetrain located on top of the cylinder head (OHV stands for Over-Head Valve). The valvetrain is driven by the camshaft via pushrods. The easy identifier? If you see a timing belt driving a single overhead cam, it's not a Kent!

The first 1600cc Kent engine is sometimes called a "Cortina" because it was first used in the 1967 Ford Cortina. It is also called "crossflow" (or X-Flow) because this was the first member of the Kent family with a cross-flow cylinder head (earlier Kent engines had the intake sitting directly over the exhaust). For 1971, Ford beefed up certain parts to deal with increased power output, resulting in the "uprated" version that current FF1600 racers know and love. Major upgrades included stronger main bearing caps, more deeply dished pistons, and a flat-bottom cylinder head — which means that certain parts don't interchange between the Cortina and the uprated. The easy way to tell these two versions apart is by the engine block casting number. Ford engine block part numbers always have 6015 in the middle, so we can ignore that part. The last two numbers were used to indicate the displacement ("BA" means 1600cc, "AA" means 1300cc), so we just focus on the first few digits. The Cortina will have an engine block number starting with 2737M or 681M. The uprated will have a casting number starting with 711M.

Three other similar blocks to watch for are the 831C "Motorsport" block, the 771M "Fiesta", and the 691M "transition". The 831C was made by Ford Racing in the early 1980s specifically to fill demand from Formula Ford racers (the current Ford Motorsport block uses the original casting number 711M, but ends with "16K" instead of "BA"). The 771M block was slightly revised for transverse mounting in the front-wheel-drive 1978-82 Fiesta, with a dished cylinder head for emissions and fuel economy (confusing partly because the Fiesta continued production for a further 35+ years after dropping the "Fiesta" engine... and partly because the Fiesta chassis was never intended to use a Kent engine to begin with). The 691M was an odd transitional engine for 1970, with later square main caps but an earlier dished cylinder head. In that respect, it's actually very close to the 771M Fiesta.

Kent engines have been made in displacements from 1 liter to 1600cc, but Ford never offered a Kent engine larger than 1600cc. (Race engine builders have bored and stroked Kent engines all the way to 1800cc with decent reliability; larger-displacement Kent engines have also been run, but not for long.) A belt-driven DOHC (Dual Over-Head Camshaft) version was made just for Lotus in the 1960s using a short-deck 1500cc Kent engine block. Cosworth put their own belt-driven DOHC heads on many different Kent engines, including the "uprated" 1600cc block. Some more fun trivia: The "uprated" engine was only ever imported to the USA for Formula Ford use. It was never OEM on any Ford road car built for the US market. The 1971-73 Ford Pintos and 1971 Mercury Capris equipped with a 1600cc Kent engine received the "Cortina" engine, despite the availability of the "uprated" version.

*Ford do Brasil produced another, totally unrelated 1.6L OHV pushrod engine from 1984 to 1997 called the CHT. Although it also has a chain-driven cam riding in the block and operating overhead valves via pushrods, the CHT was actually a revised Renault engine design (think Renault Fuego) and shared no parts with any other Ford engine. This engine was exclusive to the Brazilian market and was never produced outside of Brazil, though it was used by both Ford do Brasil and VW do Brasil. Ford and VW sharing a Renault engine... in Brazil?

2000cc is another very logical displacement for 4-cylinder engines. To date, Ford has offered at least 6 distinctly different 2-liter inline fours. Unfortunately, they are ALL overhead-cam (OHC) engines, three of them single overhead-cam (SOHC), and all of them belt-driven. So much for quick and easy identification. We're going to have to knock the 2.0L SOHC engines down one by one.

The 2.0L engine that we specialize in is the earliest one in the list. It is often called the "Pinto" because it was used in a couple million Ford Pintos. But it really makes little sense to call it a Pinto engine, and not just because Ford doesn't want us to. Not only was the Pinto (car) designed exclusively for the North American market, but this engine was already being used in many European and "rest of the world" cars before the Pinto was even announced. On top of that, it wasn't even the only engine (much less the most commone engine) used in the Pinto! Still, "Pinto" has become the common name for it, widely accepted even in much of Europe. Ford now wants us to call this engine the "EAO" (standing for European… And Others, maybe?). But because it was their first overhead-cam engine, for years Ford officially called it the OHC — a name they now want to refer to a later, unrelated 2.0L SOHC engine. To make matters worse, that later 2.0 is essentially an under-bored version of a 2.3L engine… which was originally fitted to, guess what, the 1974-80 PINTO. But that other 2.0 was never actually used in the Pinto, only the 2.3 version was. Confused yet?

This later 2.3L engine (and its 2.0L little brother) came from the Lima, Ohio engine plant, so we're going to go back to Ford tradition on this one and call them "Lima" engines. We can't quite do that with the one we want to call the Pinto engine though, partly because it was made in engine plants all over the world, and partly because the Cologne (Germany) engine plant where it originated is better known for their V4 and V6 engines. So for the next few paragraphs we'll concede this round to Ford and call it the EAO. The good news is that the 2.3L and 2.0L Lima engines were exclusive to the Americas (North and South continents). Which means, if you're reading this in England or Germany (guten Tag, wie geht's Ihnen?), chances are you may never run into a Lima. Chances are even better you'll never see a 2.0L Lima without crossing the ocean.

As far as the USA is concerned, the original EAO engine was only used from 1971-1974 in the Ford Pinto/Mercury Bobcat and Mercury Capri, and only in 2.0L form. The EAO engine continued elsewhere around the world in various cars and vans until 1992, but North America never saw it again after 1974. In 1974, Ford introduced the 2.3L Lima engine in the Americas, where it replaced the EAO engine entirely in 1975. Beginning in 1983, Ford offered the Lima engine with a 2.0L displacement (the result of a smaller bore) exclusively in the Ford Ranger pickup and the Argentina-only Ford Taunus (not to be confused with the "rest of the world" Ford Taunus… or the unrelated American Ford Taurus). The Ranger was available with the 2.0L Lima engine (alongside the original 2.3L Lima) until 1988, so the Lima is often called the "Ranger" engine. It might be even more accurate to call it a "Mustang" engine, because the Mustang is the only Ford car to offer the 2.3L Lima engine for every year of the Lima's 20-year run.

The most reliable identifier between the EAO and the Lima is cylinder block deck height, measured from the oil pan to the cylinder head. The EAO measures 207mm (8.146") tall, but the Lima measures 212mm (8.368"). The EAO also has 10 valve cover bolts (two of them on the front cam tower, pointing inwards instead of vertically), while the Lima has only 8. The distributor on the EAO engine sits a little in front of the #1 intake port, while the Lima distributor sits almost directly below the #1 intake port. Bore spacing is also different, as are bore, stroke, rod length, main journal diameter, and piston compression height. But since you can't measure those quickly from the outside…

The other other 2.0L SOHC engine is the 1997-2004 "CVH" engine. The CVH was used in many cars starting in 1980, but the 2.0L version was only ever produced for the US-spec Ford Escort / Focus and Mercury Tracer. If the original valve cover is intact, this engine is easily identified by raised lettering declaring "Split Port Induction." More easy identifiers are the aluminum cylinder head (the original EAO head was cast iron), the horrible racket it makes, and the almost certainly dropped valve seat(s). Also, the distributor sticks horizontally out of the flywheel end of the cylinder head instead of vertically out of the side of the block as on the EAO, so there's that.

If you already have the engine open (or if you only have a bare block and some parts in front of you), here are some dimensions of the engines in question.

* The Kent engine was designed primarily around SAE units (inches), so cranks get ground undersize in steps of 0.010". The 2.0L engines are both metric, so undersize grinds go in steps of 0.25mm.