"Thank you for your efforts in organizing the AIM data seminar. I enjoyed the day. I also enjoyed seeing your facility. I was very impressed with the organization and cleanliness. After visiting your location it is easier to see how you consistently offer such outstanding customer service."
J.G. from Wisconsin

AN Fitting and Hose Sizes 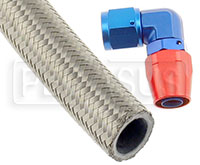 The Reasons Behind the Numbers

The idea behind AN hoses and AN fittings was to provide a flexible alternative to rigid tubing in plumbing systems on aircraft and military vehicles. Sizes for rigid tubes were already standardized, with sizes called out by tubing OD (3/16", 1/2", etc). AN hose sizes were designed to match the ID sizes of these rigid tubes. Can you see the confusion starting? Tubing is known by OD, but AN hoses are sized according to the tubing ID -- not the hose OD or even the hose ID.

AN hose sizes are based on the nominal OD of the tubing with a matching ID. It sounds convoluted, but it really is a simple idea that achieves a logical goal. If hoses were called out using the hose OD (following the same system used for tubing), the ID of a 3/8" hose would be much smaller than the ID of a 3/8" tube. On top of that, different hose types have different wall thicknesses. That sytem would make it impossible to predict the hose size required for any application.

Note that this does not match AN Bolt Nomenclature. AN bolt sizes translate directly to bolt OD in sixteenths of an inch. To help differentiate between the two systems, convention has put the "AN" before the bolt size but after the plumbing size (e.g., AN4 bolts / 6AN hose).

When racers adopted AN plumbing, it soon became apparent that engineers in different industries did not work together much. Automotive designers had their own standards and accepted sizes, and some of those were not found in aircraft systems. One glaring mismatch is the popularity of 5/16" (8mm) fuel hose on automobiles. While a specification exists for 5AN hose and fittings, it is exceedingly rare in the aircraft industry. Even manufacturers specializing in AN-style fittings strictly for motorsports tend to skip over the 5AN size for the most part.

As mentioned earlier, you can always identify AN fittings based on the male thread size (outside diameter). These sizes are constant regardless of brand, hose type, or fitting configuration. If your fitting has a convex 37 degree flare at the end, the threads will tell you the AN size (and vice-versa).

** Conventional rubber-lined stainless braided hose, except 3AN which is PTFE-lined.

Tip: If you don't have a proper measuring tool handy, open-end wrenches make great "go-no go" gauges in a pinch! If a 7/16" wrench slips over the threads but a 3/8" wrench doesn't, you have a 4AN fitting.