"Great people to do business with. I bought several items from these guys and was very pleased with the items and their attention to their customers."
R.J. from Florida 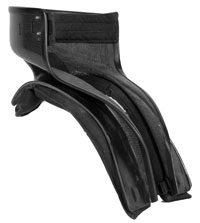 What is a HANS Device?

The HANS® Device is a Frontal Head Restraint (FHR). It is designed to minimize the risk of serious neck injuries in an auto racing crash. The body of the HANS Device is a rigid collar worn under the shoulder harness belts. Flexible tethers connect the collar to the helmet.

How does the HANS Device work?

In an impact, the HANS Device tethers limit the forward motion of the driver's head. This also transfers the tension load from the neck, which is very fragile, into a compression load against the forehead, which is considerably stronger.

Why should I trust my safety to a HANS Device?

The HANS Device is the result of over 30 years of research, development, and real-world racing use. Some 150,000 HANS Devices have been sold and used by racers around the world.

Who invented the HANS Device, and what makes them qualified to design a Frontal Head Restraint device?

After a friend lost his life in an auto racing crash at Mid-Ohio in 1981, Hubbard and Downing identified the Basilar Skull Fracture (BSF) as a major unresolved safety issue which caused an average of 22 driver deaths per year.

What is the history of the HANS Device?

2000: CART announces HANS Devices will be required for all oval track races in 2001.

2001: After 20 years, Hubbard/Downing posts their first profit. Until now, all proceeds have gone back into R & D.
Dale Earnhardt loses his life after an estimated 50 g crash at Daytona results in BSF. The change in velocity was only 43 mph.

2002: FIA standard 8858 for FHR (Frontal Head Restraints) written. NASCAR mandates the use of FHR devices.
Richie Hearn, wearing a HANS Device, survives a 139 g crash at Kentucky. Change in velocity 120 mph. He limps away with only a broken foot.

2005: NASCAR specifically mandates the use of HANS Devices despite SFI rating on some other devices.

2013: Crashes on Memorial Day Weekend bring the total number of driver deaths since 2001 to 171. The majority of these fatalities are now at amateur and semi-pro events.
Ferrari F1 driver Felipe Massa walks away from two heavy crashes at Monaco. Graham Rahal and Dario Franchitti each hit the wall at the Indy 500 but escape without serious injury.

2014: Bittersweet milestones: The 20th anniversary of Ayrton Senna's death also marks 20 years without a driver fatality at an F1 race, while Dale Earnhardt's death remains the last driver fatality in any of the three major NASCAR series. 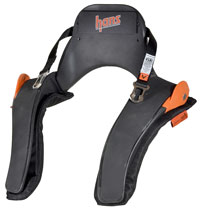