"Easily one of the most user friendly sites for ordering that I've used on the web."
J.B. from Missouri 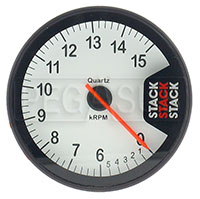 First, let's narrow down the symptoms. Too many times we get emails that just say the tach is "acting weird" or is "inaccurate". Acting weird how? Is the inaccuracty consistent or random? Different symptoms can have different causes, so specifics and details can help.

Inconsistent readings or jumping needle:
The tach needle bounces up and down instead of holding steady. If you hold the engine at a constant speed, the needle continues to move around. Shift lights fire at odd times, usually long before redline.

Now that we know what it's doing, we know which direction to dig to find and correct the cause.

Of course, there has to be an exception. Some aftermarket ignitions, ignition amplifiers, and "wasted spark" systems have a dedicated tach signal output. Be sure the tach is getting its signal from this output or it could read higher RPM even if it's calibrated properly.

This is the fun one. There are a few possibilities here, but they're all easy to fix. In fact, the fixes are often easier than actually finding the real problem, so you might want to just go ahead and try all of the possible cures instead of doggedly chasing down the root cause.

Inconsistent Inaccuracy: The Usual Suspects I

The first possibility is a "dirty" signal from the coil. The Bosch Blue coil in particular is notorious for having random secondary spikes after the plug fires. These additional little spikes are read by the tach and shift lights as another firing of that cylinder. Since the spikes are random, they confuse the tach into bouncing up and down, usually reading higher than the actual RPM (but almost never by a constant factor). Shift lights will fire randomly, sometimes even at idle. SPA tachometers seem to be particularly sensitive to these spikes, but Auto Meter and Stack tachs seem to be much less affected.

AiM loggers can use the special AiM ARP03 RPM signal filter to convert the signal into a clean, square wave signal.

Another common problem is poor electrical grounding. In this case, the needle movement sometimes (but not always) might be acceptable at idle or even while free-revving the engine, but might be bad under load and/or at higher RPM. Unlike the dirty signal or mis-calibrated tach issues above, poor grounds can develop over time, which makes it the most likely culprit if the tach behaved just fine last weekend. In extreme cases, this can be accompanied by a high-speed miss that gradually gets worse.

The fix here is to repair and reinforce the electrical ground connections. Start by examining the physical connections. Look for corroded or loose connections, both where the terminal meets the stud or screw, and where the terminal is joined to the wire. You might even find that some paint needs to be scraped away from the chassis to make a better connection. Believe it or not, we actually had to scrape paint off of a car that somehow had been running for several seasons. If no visible problems are found, you can use an Ohmmeter to check the resistance of each wire (should be less than 0.5 Ohms from one from end of the wire to the other). But an even easier next step is to just add more ground connections.

If your kill switch is in the negative side of the battery circuit (interrupting the ground), check the switch and its connections carefully. Usually a loose or failing switch will also cause the car to run poorly, but if the problem is very minor it can begin as an erratic tach signal. Fixing the problem now could save you a race later on.

A less common problem is a poor connection in the RPM signal wire. In this case, the needle will usually bounce around below the actual RPM reading because it will miss some of the voltage spikes. Look for corrosion, a broken wire, or a loose connection anywhere between the coil terminal and the tachometer.

A few more possibilities to keep in mind...

Stack tachometers have an internal battery that maintains the memory, including the programming memory. If an older Stack tach suddenly "goes crazy", it may be time to send it to Stack to get the battery changed.

On the subject of Stack... the needle on the Stack Chronotronic tach is supposed to jump around below 5000 RPM. It uses a computer-controlled stepper motor to recreate the distinctive "tick-tick-tick" movement of the old Smiths Chronometric mechanical tachometer from the 1960s. Above 5000 RPM, the needle returns to a normal, smooth sweeping motion. It's a very cool feature that vintage racers really appreciate.

Many MSD systems (and similar ignition amplifiers) require a special tach adapter or even a special tach trigger in order to work with certain tachometers. I once had an MSD box that refused to play nice with my car's VDO tach. The tach worked just fine on the pace lap, but as soon as the green flag dropped, so did the tach needle. Check with MSD to find the correct adapter for your tach before you spend an entire race shifting by ear.