"Great parts. Your parts are of great quality at an even better price. Will continue to buy from you."
W.F. from New Jersey 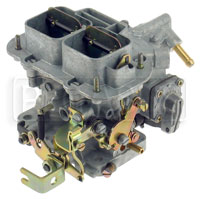 Which Weber Carburetor do I have?

Weber has made dozens of different models of carburetors throughout the years.

Unfortunately -- unlike some other brands -- many Weber carburetors are made up almost entirely of unique parts that are not used by any other model. Very few parts interchange from one model to another, and exactly zero parts were used on every Weber carburetor model. That means that you must accurately identify which carburetor model you have before you can order jets or replacement parts.

That's easy, mine has a tag (or a sticker) on it with a 6-digit number!

That is not a Weber model number. Tags and stickers are generally used by aftermarket companies (and even OEM automakers) to put their own part number on the carburetor, and we have no way to cross-reference your number to a Weber model. Weber model numbers are always stamped on the carburetor body. They always begin with a 2-digit number (or a pair of 2-digit numbers separated by a slash) followed by three or four letters. There may or may not be more numbers and/or letters after that.

Where is the model number on my Weber carb?

Note that the stamp on the downdraft may be facing the engine. You may need a flashlight and a mirror to see it. Click either photo to enlarge.

The main part of the model number is a 3 or 4 letter code that indicates the carburetor design. This is where it gets confusing. Each letter is a one-letter abbreviation for a word, but the words are all Italian. Worse, Weber sometimes used the same one-letter abbreviation for two different words. And just to be quaint, they never published a decoder table. The good news is that it doesn't really matter what the letters mean because the unique combination of numbers and letters will positively identify what the carburetor is.

Optional suffixes take the form of numbers or numbers and letters. This usually indicates a "variant", generally a carburetor that was set up for a specific application. The factory jetting may be different, or a linkage might be swapped from one side to the other. (The Alfa Romeo Sprint Veloce came with a pair of "40 DCOE 2" model carburetors, but the Spider Veloce had two "40 DCOE 32" model carbs. The difference in this case is in the factory jetting.)

Here are a few of the Weber carburetor models we deal with most frequently. Suffixes in parentheses are not critical and only indicate minor tweaks.

* Even better, the DGV body and top plate castings are symmetrical. Weber could have simply moved the fuel inlet fitting, accelerator pump, and linkage to the other side. Instead, they used an entirely different top plate. The DGV and DFV can't even use the same air filters.