"Very organized and professional group. Description of items I buy are always accurate. Enjoy purchasing from Pegasus."
O.J. from Florida (yes, those are his real initials) 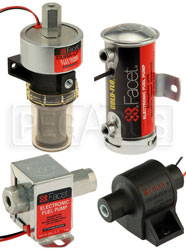 We say FAH-set (rhymes with "fast 'vette" or "fact check"). Facet is an actual English word meaning "one side or face of something many-sided" (as in, a cut gemstone has many facets) or "an aspect that makes up a subject" (as in, this company is present in many different facets of the automotive industry). (And yes, we have heard all of those pronunciations and more.)

I have a Facet pump that looks just like one I saw on your site. Is it the same?

Not necessarily! In each particular series, Facet offers at least 9 (and as many as 46!) different pumps that all look identical but have very different pressure and flow ratings. The only way to know which pump you have is by looking at the Facet part number stamped on the mounting foot. Click the link for more information.

I have an old Bendix pump. Are they still available?

Yes, but they are now labeled as Facet. Facet is the same company making the same pumps from the same designs under the same part numbers (you don't need a cross-reference chart). They are even located in the same factory.

A not-so-brief history of Facet and Bendix:
1910: Vincent Bendix invents the pre-engaged starter drive (starter drives are still known generically as a "bendix" today).
1928: Income from his patent allows Bendix to start the Bendix Brake Company in Elmira, NY (Facet pumps are still made at the same Elmira plant).
1950: Bendix begins manufacturing electrical fuel pumps. They are immediately popular, particularly with European automakers.
1974: After decades of expansion, the FTC orders Bendix to spin off several divisions, including the fuel pump line.
1976: FACET Enterprises is born. FACET is an acronym for Filters, Automotive Components, and Environmental Technology.
Today: The company, now known simply as Automotive Components, still designs and builds Facet fuel pumps in the USA -- in the original Bendix Brake Company plant.

I need a positive-ground Facet pump. Can you still get them?

I only need an electrical pump to prime my mechanical pump. Can I still pull fuel through a Facet pump when it is off?

If you also want to be able to run the car on the electrical pump, then you need to check your chosen pump.

Are Facet fuel pumps compatible with diesel or ethanol?

Yes. All Facet low-pressure fuel pumps (Cube Style, Posi-FLo, Gold-Flo/cylindrical, and Dura-Lift) are fully compatible with gasoline, diesel, biodiesel, ethanol blends up to and including E85, and commercial fuel additives.

How much amperage do Facet pumps draw?

Do I need to install a fuse in the electrical feed line?

Where can I mount a Facet pump? Can I put it in the engine bay?

Electric fuel pumps like these tend to push better than they pull. For this reason, you should mount the pump as close to the gas tank as possible and a low as practical. Each pump has a "dry lift" rating which must not be exceeded or the pump will starve.

What about a Dura-Lift pump?

The Dura-Lift series feature unusually high dry lift ratings because they are specifically designed for lifting fuel a great distance in fuel transfer applications. They are often used on marine generators and refrigerated semi trailers, where the fuel tank is located 5 to 10 feet below the engine. A Dura-Lift pump can be mounted in the engine bay to replace the mechanical lift pump in a diesel truck, but they are not a good choice as the main fuel pump in most automotive fuel systems.

Does it matter how I mount a Facet pump? Can I mount it sideways?

How much heat can Facet pumps stand?

Facet low-pressure pumps have an operating temperature range of -40° F to 180° F (-40° C to 82° C). Exceeding the maximum recommended temperature will cause the pump to stop working.

We have had a few customers report that their overheated pump started working again after it cooled off, but in every case the pump had suffered permanent damage and did not work for very long.

This is another reason to mount the pump close to the fuel tank instead of in the engine compartment.

Why do Facet pumps list a pressure and a flow rating, but then you give a different flow at a different pressure?

There is a relationship between pressure and flow: As flow increases, pressure decreases. The pressure and flow ratings are to be considered the maximum for any given pump, but remember that you can't have both at once. Maximum pressure happens with very little flow, and maximum flow happens with very little pressure. We try to pick a point near the midpoint of the graph to illustrate a "typical" application.

I just unpacked my new Facet pump and gas spilled out. Did you sell me a used pump?

No. This is not gasoline but a petroleum-based light solvent (which is fully compatible with gasoline). Facet uses this solvent to bench-test every pump prior to shipping, and some of the solvent often remains inside the pump. It will not affect performance or harm anything inside your engine.

My new Facet pump seems to run constantly, but the old pump used to slow down or stop. Is the new pump defective?

No. All current Facet low-pressure pumps run constantly as long as power is supplied.

Older Gold-Flo (cylindrical) pumps were known as "Interruptor" pumps because they would start off pumping very quickly, then slow down as they built pressure. They might even stop completely once they reached their design pressure. The interruptor behavior went away when Facet changed the Gold-Flo series from breaker points to the same solid-state operation as the cube-style pumps (around the late 1990s). The part numbers for solid-state Gold-Flo pumps have an E at the end to indicate "Electronic" operation. During the transition, Gold-Flo pumps with breaker points had part numbers that ended in I (for Interruptor).

Note that we still use the original part numbers without a letter at the end, even though all Gold-Flo pumps are now the E (Electronic) version.

The filter bowl on my Dura-Lift pump isn't filling all the way. Is it defective?

No. The fuel level will normally be at or below the level of the pickup, which is located just about at the halfway point of the bowl.

I just need a basic pump. What does everyone else buy?

If everyone bought the same pump, we wouldn't stock over 50 different versions. But the vast majority of carbureted automotive applications can be covered by just a handful of pumps.